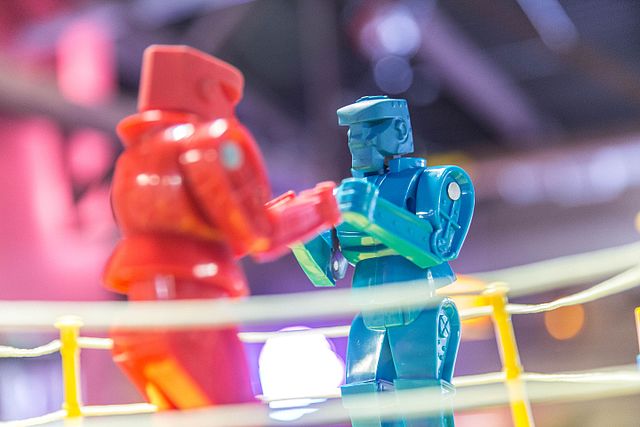 We’re not sure what neurotransmitters really look like. We’d like to think that they all work together as a team, but sometimes we wonder if they might occasionally be battling each other, like Rock ‘em Sock ‘em Robots trying to knock each other’s block off.

Our lead story is unexpected, and not exactly new, but contains extremely interesting neurotransmitter related information of which we were unaware, and chances are that this was completely off your radar.

If you have Parkinson’s disease and pain or discomfort that interrupts your sleep,  then we think we have some fresh insight, and for some, something to discuss with your doctor.

Restless Legs Syndrome (RLS) is a horribly misleading term for a condition that is estimated to affect 5% of adults. The branding, at least for my mind, connotes a playful condition, when it is actually a painful condition at worst and a sleep-depriving condition at best. Sleep is interrupted by pain or discomfort, usually in the legs, but can progress to the arms or torso.

You may not be aware that RLS is considered to be both a sleep disorder and a movement disorder. RLS is believed to be related to a dysfunction in one of the sections of the brain that control movement (the basal ganglia) that use the brain chemical dopamine. If that sounds familiar, that is because that is the exact same area of the brain, and the same chemical, that is the culprit behind the primary motor symptoms of Parkinson’s disease.

Up until a few years ago, the primary treatment for RLS were Parkinson’s drugs, albeit at lower doses. But 6 years ago, a small study at Johns Hopkins led to a major change in how RLS is treated, and discovery that a different neurotransmitter was more responsible for the sleep issues.

Does this offer any relevance for people with Parkinson’s who have sleep disruption? We are not qualified to answer this, but basic logic suggests that for some, this could be very significant, and worth getting on the appointment calendar of your nearest movement disorder specialist if your pain and sleep issues seem similar to RLS.

Restless Legs Syndrome (RLS) and Parkinson’s disease have interesting dopamine connections. Both are movement disorders believed to be the result of dopamine dysfunction in the basal ganglia. Some Parkinson’s pain may actually be restless legs or arms. Could major changes in RLS treatment (targeting the neurotransmitter glutamate instead of dopamine) over the past few years be relevant to getting a good night’s sleep with PD?
http://parkinson.fit/interrupted-sleep-exploring-links-between-parkinsons-disease-and-restless-leg-syndrome/

And for more clarification about why we think this is significant, we added another article with a more focused explanation:
http://parkinson.fit/pain-explaining-why-changes-to-rls-treatment-could-be-significant-for-parkinsons-pain/

Last week, we attempted to explain this in our newsletter. But…well…we spent half the weekend at the Great British Beer Festival, which stunted our editorial quality. Or more appropriately, it limited our ability to form complete sentences and comprehensible paragraphs. Or maybe, it just made for a great day out with old friends, where none of the conversation was focused on Parkinson’s. A lot of recent research that is suggesting dysfunction related to the acetylcholine neurotransmitter may be contributing to PD symptoms. As a practical starting point on this issue, several months ago, we reported on a Mayo Clinic research commentary that analyzed Vitamin B-12 research. The two things that you absolutely need to know are that lower levels of B-12 in people with PD correlates with worse progression of the disease; and second, low-normal is not good enough. There’s a lot more, but just make sure you’re getting this tested in your regular blood tests.
http://parkinson.fit/mayo-clinic-report-on-low-vitamin-b-12-and-parkinsons-disease/ The Mayo B-12 commentary devotes considerable attention to the involvement of acetylcholine, and a Yale research paper says old assumptions about acetylcholine need to be re-evaluated. Dopamine deficiency seems to be behind slowness of movement, tremor, and freezing. However, researchers are suspecting acetylcholine plays a role in gait disturbances, balance, walking, postural sway and dyskinesia. Does boosting acetylcholine, in conjunction with conventional levodopa dopamine therapy make sense? Interestingly, there was a research study almost 30 years ago that may have done this without realizing it was doing so. http://parkinson.fit/beyond-dopamine-does-pd-effect-other-neurotransmitters/

On a lighter note, yes please something lighter…wow, that’s some dense material to chew on…

We look at why hope is so important to living well with Parkinson’s. A friend forwarded me a video of an excellent inspirational and entertaining commencement address by legendary college football coach Lou Holtz. On the surface, it has nothing to do with living with Parkinson’s. He does not have PD, and he was addressing newly minted college graduates ready to take on the world. But when he said the following, I felt like he was speaking to me directly, right here and now: “You have to have something to hope for, something to dream. And even though you’ve done great things so far, what’s going to happen now?”
http://parkinson.fit/why-hope-is-important/

Note: It is not essential to read all of my dopamine related commentary in the above link. Just enjoy a few inspirational moments…you’ve earned a well deserved mental break if you made it this far. You might have missed it, but last week we published one of Gavin Mogan’s best essays. It’s natural to focus on what Parkinson’s takes from you, but Gavin looks at treasures he has gained, and how his passion for sport has been fundamental to challenging PD over the past decade. “How Parkinson’s gave me a better long-range jumper, a better baseball throwing arm, and a better outlook on life!”
http://parkinson.fit/buried-treasure-what-parkinsons-gave-me/

For the coming week, I’m headed to Dr. Laurie Mischley’s PD Summer School at Bastyr University. Dr. Mischley is a leading researcher on diet and nutrition as it relates to Parkinson’s Disease. She wrote a book on the topic that was published back in 2009, and has continued to focus on this topic over the decade since. She is currently leading the CAM Care in PD study (Complementary & Alternative Medicine Care in Parkinson’s Disease), which has a goal to ‘collect as much data as possible over a five-year period with the hope of finding dietary and lifestyle factors associated with a slower disease progression’.

In 2017, her team published a study titled “Role of Diet and Nutritional Supplements in Parkinson’s Disease Progression“, which analyzed  the dietary practices of people with Parkinson’s Disease and their rate of disease progression. The goal was to attempt to identify food and/or nutrition that were associated with either slower (better) or faster (worse) progression of PD. Highlights and links to two of her recent presentations can be found here: http://parkinson.fit/role-of-diet-and-nutritional-supplements-in-parkinsons-disease-progression/

Dr. Mischley is now investigating positive deviancy, which is “based on the observation that in every community there are certain individuals or groups (the positive deviants), whose uncommon but successful behaviors or strategies enable them to find better solutions to a problem than their peers. These individuals or groups have access to exactly the same resources and face the same challenges and obstacles as their peers.” More details on Bruce Ballard’s excellent Parking Suns blog: https://www.parkingsuns.com/2019/08/12/positive-deviancy-and-enriched-environment/

Magic Therapy: Dovid Rabotnick uses the magic of optimism and actual magic to keep his spirits up and give back to others.
https://signalscv.com/2019/08/the-magic-of-making-people-feel-better/

Rock band Judas Priest has been raising money for Parkinson’s disease research through the Glenn Tipton Foundation, a charity established by the band’s guitarist who has been diagnosed with PD. They’ve raised $150,000 so far.
https://www.loudersound.com/news/judas-priests-glenn-tipton-foundation-raises-dollar150000

A new technology known as sonogenetics can control neural activity by using sound frequencies. The technology could be used to non-invasively treat a range of neurological conditions. Sreekanth Chalasani explains his team’s research in progress at the Salk Institute.
https://neurosciencenews.com/sonogenetics-brain-control-14689/

Parkinson’s Blogs That Caught Our Attention

Sharon Krischer (a.k.a., Twitchy Woman) has some great advice for the newly diagnosed – “10 Things That Can Help You Cope With Your New Diagnosis of Parkinson’s Disease”:
https://www.yahoo.com/lifestyle/10-things-help-cope-diagnosis-001119092.html

She also reflects on words of wisdom from her 4-year old grandson on her regular blog:
https://twitchywoman.com/2019/08/16/words-of-wisdom-from-a-4-year-old/

Benjamin Stecher’s Tomorrow Edition has an interesting article comparing what patients want with what pharmaceutical companies want. He believes they are an easy scapegoat, and don’t deserve all of the criticism that they receive. Yet, our interests are clearly not aligned. He says big pharma’s goal for PD would be a treatment that extends life (or maybe quality of life) by 20%. Is that what patients want? Not exactly…
https://tmrwedition.com/2019/08/11/what-patients-want-vs-what-pharma-wants/

The Davis Phinney Foundation talks about the role of personal trainers in Parkinson’s exercise. I personally believe that we don’t talk about them enough. I may be a fan of the Rock Steady Boxing program, but I’ve been working with a personal trainer since a few weeks after I was diagnosed with Parkinson’s, and I think that has been the most important thing that I have done to help preserve my motor function and build strength.
https://www.davisphinneyfoundation.org/blog/personal-training-and-parkinsons/

As a continuation of the above, I should also include a link to my personal trainer, Chad Cannon at CannonFit in Bluffton, South Carolina.
https://www.cannonfit.com