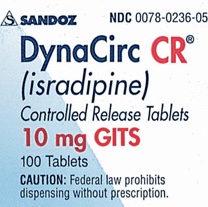 In an otherwise slow holiday week, University of Cambridge researchers are suggesting that an existing high blood pressure medication might be repurposed to treat Parkinson’s Disease. Felodipine, at proportionally low doses was able to induce autophagy and clean out misfolded proteins in a mouse model of Parkinson’s. There is a lot more research needed as more PD research increasingly targets autophagy:
https://www.eurekalert.org/pub_releases/2019-04/uoc-bpd041619.php 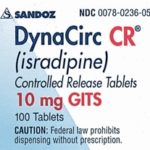 This study reminds me of another high blood pressure medication, isradipine, which saw positive results in an animal model study 12 years ago. Researchers have recently completed a 3 year phase 3 study of isradipine, and these latest results are expected to be published within the next 2-3 weeks. [Update: results are released, scroll to next post.]

Isradipine is a calcium channel blocker that is currently prescribed to treat high blood pressure. (Felodipine is also a calcium channel blocker.) It came to the attention of Parkinson’s researchers when data review studies showed that people who took the drug for hypertension had a lower incidence of Parkinson’s Disease:
https://www.ncbi.nlm.nih.gov/pmc/articles/PMC2917467/

I can’t emphasize enough how rare it is for a new Parkinson’s drug trial to make it to phase 3. This is not some early exploratory study…it has been in process for over 10 years, so the results could be significant for people with early stage Parkinson’s Disease.

Pharmaceutical studies begin with drug design and discovery, often starting with computer models, and “in vitro” tests with cells outside of the body, before proceeding to animal testing. If this is successful, they begin the clinical phase of development by testing for safety in human subjects.

Phase 1 trials are the first stage of testing in human subjects, usually smaller in scale with less than 100 participants. These tests are designed to test the safety, side effects, best dose, and/or formulation method for the drug.

Phase 2 trials are more focused on evaluating whether the drug has sufficient biological activity to warrant further testing. These are larger studies with up to 300 participants. This is where studies usually fail, either because of safety, or because the drug doesn’t prove to be a effective as expected.

Phase 3 studies involve larger patient groups (more than 300 participants) and are aimed at being the definitive assessment of how effective the drug is, in comparison with existing treatments. Because of their size and comparatively long duration, Phase III trials are the most expensive, time-consuming and difficult trials to design and run, especially in therapies for chronic medical conditions like PD.

Needless to say, this phase 3 study of israpidine is a big deal. STEADY-PD III trials results are expected to be released at the 2019 American Academy of Neurology meeting in Philadephia on the 4th-10th May, 2019. A report on the final study results is scheduled for 11am on 7 May, 2019:
http://tools.aan.com/annualmeeting/search/index.cfm?fuseaction=home.detail&id=7296&keyword=&topic=&type=all

We anxiously await the results.

And another study disappoints….

PHILADELPHIA – A study of a blood pressure drug does not show any benefit for people with Parkinson’s disease, according to findings released today that will be presented at the American Academy of Neurology’s 71st Annual Meeting in Philadelphia, May 4 to 10, 2019.

The drug isradipine had shown promise in small, early studies and hopes were high that this could be the first drug to slow the progression of the disease.

“Unfortunately, the people who were taking isradipine did not have any difference in their Parkinson’s symptoms over the three years of the study compared to the people who took a placebo,” said study author Tanya Simuni, MD, of Northwestern University Feinberg School of Medicine in Chicago and a member of the American Academy of Neurology.

The phase 3 study involved 336 people with early Parkinson’s disease at 54 sites in the US and Canada as part of the Parkinson Study Group. Half of the participants received 10 milligrams daily of isradipine for three years, while the other half received a placebo.

The drug had shown promise in animal studies, and a phase 2 study in humans did not show any safety concerns. Researchers became interested in the drug when the observation was made that use of the drug for high blood pressure was associated with a lower risk of developing Parkinson’s disease.

“Of course, this is disappointing news for everyone with Parkinson’s disease and their families, as well as the research community,” Simuni said. “However, negative results are important because they provide a clear answer, especially for the drug that is commercially available. We will all continue to work to find a treatment that can slow down or even cure this disease.”