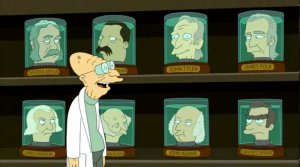 You know it’s been a slow news week when our lead story is about NASA sending brain cells from people with Parkinson’s into space, so that scientists can study them in low gravity. A practice launch with the brain cells of patients with Parkinson’s and MS patients will launch July 21 as NASA sends a load of supplies to the International Space Station. A full lab with the cells will go up in the fall. https://www.wkyufm.org/post/cells-space-kentucky-company-hopes-experiment-will-help-ms-parkinson-s-treatment OK, that’s not really our top story. It was just an excuse to use the image from Futurama of a scientist interacting with living heads in jar, which is how we imagine the study taking place. We hope this latest research produces results, but sending things into space just isn’t as interesting as it used to be. Space age technology has actually made it into our daily lives. In fact, USA Today just reviewed dozens of modern products that exist because of advancements in the field of space exploration, and compiled 30 common items that were invented for use in the race for space: https://www.usatoday.com/story/money/2019/07/08/space-race-inventions-we-use-every-day-were-created-for-space-exploration/39580591/ I was a bit surprised to see NASA getting credit for the DustBuster in item #5, but item #27 hit a bit closer to home: “Intended for use to help in growing plants aboard space shuttles, NASA’s LED technology has been utilized in the development of LED medical devices that relax muscles and relieve pain in soldiers, cancer patients, and those with Parkinson’s disease.” It has been 3 weeks since I started my full body photobiomodulation (red light therapy) treatments, and I should post an update, but it is still too early. I need more time to better analyze and understand, but I have felt a significant improvement/reduction of what I would categorize as full body soreness. I don’t know if this is pain caused by Parkinson’s, arthritis or over-exercise, but the treatment seems to be helping. While photobiomodulation might offer hope for improvement of other PD symptoms, I think pain is the most promising area of relief, and I was surprised to see this direct reference in USA Today. Our recent posts on red light therapy can be found here: http://parkinson.fit/photobiomodulation/

With those space-age thoughts behind us, let’s turn our attention back to life on earth, with Parkinson’s…

Parkinson’s disease disrupts rhythm. And sometimes PD obliterates rhythm, battering it beyond recognition. But, we don’t have to accept it this way. Working to maintain mind-body connections is well worth the effort … if you call music, dance, sports, games, or the like, effort. Gavin Mogan reflects on, and shares his approach to coping with PD: http://parkinson.fit/reconnecting-through-rhythm/

We’ve prepared a presentation to explain some concepts regarding exercise for Parkinson’s Disease, explaining how exercise intensity is measured and why it matters, and the concepts of vigorous intensity exercise and forced exercise. http://parkinson.fit/exercise-intensity/

The presentation above explains some of the research behind bicycling therapies for Parkinson’s in the discussion of forced exercise. A Boston TV station discusses additional local research being performed on cycling’s effect on PD progression, and visits a local “Pedaling for Parkinson’s” exercise classes:
https://www.wcvb.com/article/researchers-look-to-cycling-as-possible-treatment-option-for-parkinson-s-disease/28369258 Medications for PD fall into three categories. The first category includes drugs that increase the level of dopamine in the brain. The second category of PD drugs affects other neurotransmitters in the body in order to ease some of the symptoms of the disease. The third category of drugs prescribed for PD includes medications that help control the non-motor symptoms of the disease, that is, the symptoms that don’t affect movement. If you’re taking so many drugs that you can’t remember which drug does what, this information from the National Institutes of Health may help jog your memory:
http://parkinson.fit/parkinsons-disease-medications/

Are you taking any nutritional supplements or vitamins in the hope that they will help with Parkinson’s? A recently published research paper reviews PD related research on a long list of different vitamins and supplements: https://doi.org/10.3390/biom9070271  Surprisingly, I did notice a few that were left off the list: B-12 (low levels may be associated with worse progression of PD), B-1 (promoted as a therapy by an Italian doctor, I’m not aware of any other research), and TUDCA (an over the counter variation of UDCA). A clinical trial of UDCA for Parkinson’s is recruiting right now in the UK (London and Sheffield), details here: https://www.cureparkinsons.org.uk/News/udca-trial

The Food and Drug Administration (FDA) has granted Fast Track designation to PR001 from Prevail Therapeutics for the treatment of Parkinson disease patients with a GBA1 mutation (PD-GBA). PR001 is an investigational single-dose gene therapy that utilizes an AAV9 viral vector to deliver a properly functioning GBA1 gene to a patient’s cells. A  combined phase 1 & 2 clinical trial is being planned for the second half of 2019 to investigate the safety and tolerability of PR001 along with key biomarkers and exploratory efficacy end points in patients with PD-GBA. https://www.neurologyadvisor.com/topics/movement-disorders/pr001-gets-fast-track-status-for-parkinson-disease-with-gba1-mutation/
For a more detailed explanation of gene therapy and the GBA1 mutation, see this excellent post from The Science of Parkinson’s website:
https://scienceofparkinsons.com/2019/06/21/prevail/ We think that regardless of your age, you’re always too young to have Parkinson’s. When someone is diagnosed with Parkinson’s at a younger age, it is called Young Onset Parkinson’s Disease (YOPD). Parkinson’s is tough to deal with at any age, but younger people with Parkinson’s are in a different phase of life, and face different challenges. We highlight David Sangster’s @yopdTV project, and the initial video series “10 Questions about YOPD”. I had a bit of fun contributing to this great project…attempting to mix in some humor…much of which didn’t make it into the official videos, but is included toward the bottom of the following article:  http://parkinson.fit/yopd-young-onset-parkinsons-disease/ The Tomorrow Edition discusses the “I AM ALS” campaign that is working to tear down some of the research barriers that exist between different neurological diseases, with the hope of finding a cure for all: https://tmrwedition.com/2019/07/11/why-curesforall/ 64-year old Larry Grogin had planned as a 3,000-mile, USA coast-to-coast run this  summer. But a recent Parkinson’s disease diagnosis prompted an adjustment to his plans. Over the course of 30 days, he is now preparing to run a total of 1,100 miles in eight different areas of the country. http://parkinson.fit/64-year-old-new-jersey-man-was-planning-a-3000-mile-run-now-diagnosed-with-pd-will-run-1100-miles/ There has been a lot of talk recently about the brain-gut connection, and how Parkinson’s Disease may start in the gut. Invigorate Physical Therapy & Wellness has a timely article on gut health: https://www.invigoratept.com/blog/parkinsons-gut-health-microbiome-what-do-we-know

A few months ago, Bruce Ballard wrote an excellent article on his Parkinson’s blog Parking Suns, where he detailed his keys to PD, which are Physical Exercise, Social Connectedness and Creativity. He provides 8 examples of his exercise efforts to emphasize the importance of variety: http://www.parkingsuns.com/2019/04/07/my-keys-to-pd/

A Cincinnati TV station tells the story of a husband’s struggle to be an adequate caregiver for his wife. The wife has Alzheimer’s, and the husband’s Parkinson’s Disease was making it more and more difficult for him to be able to care for them both. After successful Deep Brain Stimulation (DBS) surgery, he is able to better continue to care for his wife: https://local12.com/health/medical-edge-reports/caring-for-the-caregiver-local-caregiver-takes-next-step-in-journey-to-heal-parkinsons

How long do the effects of Deep Brain Stimulation (DBS) surgery last? Parkinson’s Humor blogger YumaBev has been detailing her recent surgery for a battery replacement after 6-1/2 years: https://parkinsonshumor.blogspot.com/2019/07/cell-phones-ipads-tablets-laptops.html

Still on the subject of DBS longevity, a recent study found generally positive results in a 13-year follow-up: https://www.frontiersin.org/articles/10.3389/fneur.2019.00689/full

Finally, you’ve heard the analogy of how Parkinson’s Disease is like a snowflake before, but do you know both versions of the analogy?