An article about an exercise research study prompted me to partially rethink my Parkinson’s Disease exercise philosophy. Exercise intensity may slow Parkinson’s progression, but in the long run, exercise sustainability is essential to a better quality of life. 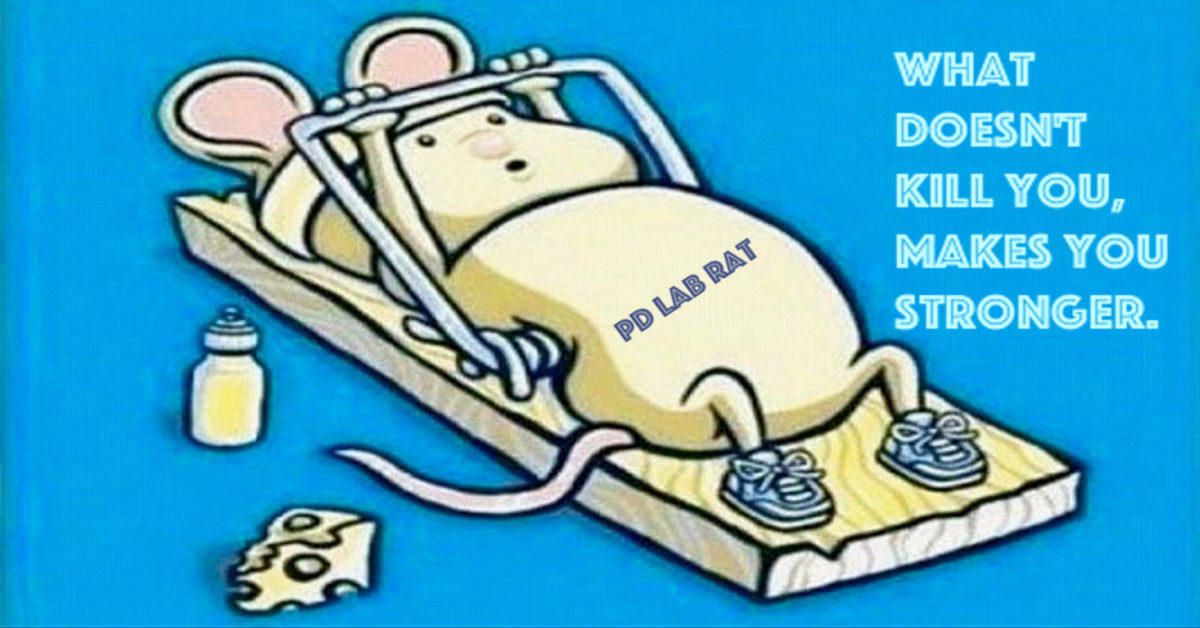 Several months ago, an article about an exercise research study prompted me to partially rethink my Parkinson’s Disease exercise philosophy. The article was about a study looking to identify patterns in exercise changes among people with Parkinson’s over time.

Although the article didn’t say this in so many words… exercise intensity may slow Parkinson’s progression, but in the long run, exercise sustainability is essential to a better quality of life.

This follow-up study wanted to find patterns in exercise changes over time. They found no factors that would predict increased exercise, but they found a significant predictor for reduced exercise: individuals had a 3.5 times greater likelihood of decreasing exercise for every additional hour (per week) of exercise they do.

Wait, what? What does this mean?

Are we encouraging people to exercise more, so that when this additional exercise makes them more likely to cut back on exercise, they are still exercising more than they were before?

Well, I’ve yet to find the actual research study, only an article summarizing it. I hope that somebody reads this and can share the full study report with me. But in the meantime, I’ve done my own analysis based on my experience of 5+ years of intense exercise for PD.

How to Increase Exercise Sustainment While Living with Parkinson’s | Davis Phinney Foundation
In a group of nearly 2000 people with Parkinson’s, researchers found that people who increased their exercise by 1.5 hours per week experience benefits in health.

…just the type of article that I’m always searching for…what new insight or inspiration might it offer?!

Research scientists at the Shirley Ryan AbilityLab and Northwestern University have spent the last 18 months exploring the exercise experiences of people living with Parkinson’s, with the goal of developing resources to improve exercise sustainment. This project was funded jointly by the Davis Phinney Foundation and the Parkinson’s Foundation.

Sounds great so far…the anticipation is building…what did they find?

First, the research team used data from the Parkinson’s Foundation – Parkinson’s Outcome Project to identify patterns in exercise changes over time. In a group of nearly 2000 people with Parkinson’s from around the world, they found that people who increased their exercise by 1.5 hours per week experience benefits in health that were associated with the change in exercise. Similarly, decreasing exercise by 1.5 hours per week is associated with worsening health.

Ok, this is not new, it is a recap of the results of the previous study. We should encourage everyone to exercise 1.5 hours more every week and we can make a difference in people’s lives.

What did the new study find?

When they used previous data to determine if there is a factor that can predict increased exercise, there was no significant association found.

I’m not a research scientist, but I seriously doubt that these people with Parkinson’s increased their exercise due to random factors. Surely, they were inspired by advice from a doctor, a family member or friend, or perhaps even by educational efforts of the Davis Phinney Foundation and the Parkinson’s Foundation.

I’m sure the research team had plenty of time to do their math over that 18 months, and they probably didn’t expect a smart ass like me to analyze it. But, here’s the thing…my numbers may be overstated by exponential application, but I think the researchers are actually on to something very significant.

So, why do people who exercise a lot reduce the amount they exercise?

This relationship was strongest in those with other additional health conditions (comorbidities), people who relied on a regular care partner and people with worse mobility.

Similarly, none of us are getting any younger, we age, which also affects mobility and physical capability.

But, surely, both of these issues affect all levels of exercisers. They are not specific to people who exercise a lot.

I don’t have any research data to back this up, but based on my experience, I believe there are three major reasons that people who exercise a lot cut back or stop exercising: injuries, pain/soreness and a loss of motivation (low dopamine likely contributes to this).

During my life, I have had multiple periods of time where I exercised a lot for a year or two, lost 30 to 40 pounds … then I’d get injured or simply lose motivation, cut back on exercise, and put the weight back on. So I’m familiar with cutting back on exercise.

Parkinson’s lit a fire under me to exercise again, and this is the longest stretch of regular exercise activity during my life. I’ve made great progress with my fitness over these 5 years, and I believe that it has helped keep my PD symptoms from progressing significantly over these 5 years.

But, how do I feel most days? Sore, mostly.

Is this Parkinson’s pain?

Is this soreness from over exercise or improper exercise?

If your town is anything like mine, you’ve probably wondered why there are so many chiropractor offices. I’m not sure exactly what is going on, but the chiropractor per population ratio is definitely on the rise.

I’ve started to realize that regular exercisers (and people with physically demanding work) seem to be the people most likely to seek out the services of a chiropractor. Exercise is hard on the body.

Don’t get me wrong, not exercising is even harder on the body, just in different ways.

If pain is influencing your decisions on whether or not to exercise, talk to a professional. Start by talking to your trainer or physical therapist. Talk to your doctors. You may even want to talk to a chiropractor.

Instead of skipping exercise altogether, modify, limit or eliminate categories of exercise that involve areas of bodily pain. Choose more low-impact exercise. Get professional advice, and address your pain before the pain becomes more limiting.

Exercise for Parkinson’s needs to be “sustainable exercise”, because it is something that you will be doing week after week after week. Hopefully for a long time.

In the Parkinson’s world, they just tell you to find an activity that you enjoy, because that will help you stick with it (e.g., make it sustainable).

It is also important to recognize the need for variety…both to avoid boredom and to ensure exercise attention is given to different muscle groups.

And, it is also important (but not always possible) to try to avoid injury.

Personal trainers will have you work different muscle groups on different days to give muscles time to recover after an intense workout.

Always build up your workouts gradually.

Marathon runners use a 10% rule when training for a marathon, meaning that they build up their weekly mileage gradually, increasing by no more than 10% over the previous week.

Progressive resistance/strength training principles are similar, you don’t increase weight or reps until you have mastered the previous weight with a full range of motion, and then you increase gradually.

It is as important not to over exercise, as it is to under exercise.

By all means, push yourself and test your limits, but then give your muscles a chance to recover.

I realize that most of us are in more danger of under exercise than overexercise. An article from LiveScience has some good tips on avoiding exercise excuses:

How to Start an Exercise Routine and Stick to It
Science has found a number of ways to boost your chances of keeping up an exercise routine.