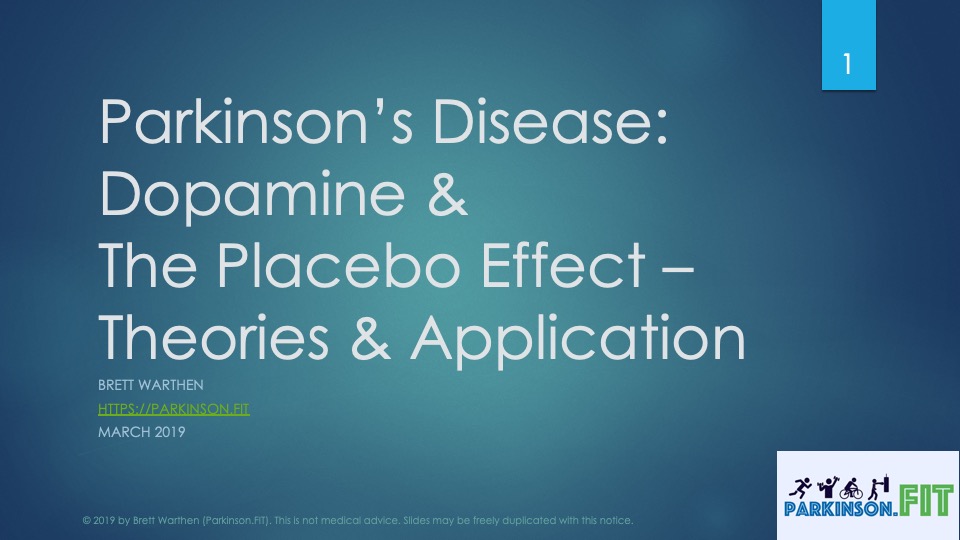 What if I told you that you could snort saline solution up your nose and it would significantly improve your Parkinson’s disease symptoms? When you inhale the solution, it will work better if you line down, and tilt your head back. Take your time, and release the solution a little bit at a time…at least over 5 minutes, and maybe as many as 10 minutes.

And what if I told you that this has already been attempted in a clinical trial, and the improvements measured were clinically significant?

This was the puzzling and frustrating result of phase 2b of Dr. Laurie Mischley’s clinical trial of intranasal glutathione for PD. The purpose was to test an inhaled mix of glutathione and saline. Patients in the placebo group received only the saline, because aside from helping with nasal allergies and dryness, inhaling the saline solution should have no effect.

Phase IIb Study of Intranasal Glutathione in Parkinson’s Disease. - PubMed - NCBI
Reduced glutathione (GSH) is an endogenously synthesized tripeptide depleted early in the course of Parkinson's disease (PD) and GSH augmentation has been proposed as a therapeutic strategy in PD.

The placebo effect is a challenge for many clinical trials, but it seems to play a far larger role in trials of treatments for Parkinson’s disease. In these trials, a significant number of individuals usually see improvement during these tests as part of the placebo group.

Drug companies and researchers consider the placebo effect to be a nuisance. The fact that some people see improvement without treatment doesn’t just rule out that individual as a potential customer, it makes it harder to prove effectiveness for the treatment. Improvements in the placebo group are dismissed as spontaneous temporary remission, wishful thinking, or more often, it is thought that maybe this individual didn’t really have the disease or condition…that it was all in their head to begin with.

Of course, isn’t PD actually all in your head? You feel the effects throughout your body, but it is a neurological condition whose symptoms are caused by a condition in your brain.

Harvard researcher Dr. Kathryn Hall believes that there is a genetic factor to the placebo effect, and contends that one particular genetic polymorphism seems to be a frequent factor: COMT V158M rs4680 met/met (A/A). This caught my attention, because I have this particular gene. Based on this research, some have suggested that people with this gene should not be included in smaller trials, or at least analyzed as a specific subset. These individuals are not particularly rare…they are estimated to be about 25% of population, so excluding them from all clinical trials is not realistic.

The reality is that there are probably many genes or combination of genes that contribute to the likelihood of experiencing a placebo effect.

Why is COMT V158M particularly interesting as it relates to Parkinson’s? Well, this particular encoding affects the amount of COMT enzyme produced. COMT is involved with the breakdown of dopamine. COMT inhibitor drugs are sometimes used as an adjunctive treatment of advanced Parkinson’s, to slow down the breakdown of dopamine, and allow it to last longer and reduce so-called “off-periods”.

So, the theory goes that when dopamine is produced, it lasts a little longer in people with less COMT.  (There are also various genes that affect how much MAO enzyme is produced, which is also involved in the breakdown of dopamine.)

Could the placebo effect related to dopamine? When it comes to Parkinson’s, I believe it is.

Dopamine is the neurotransmitter whose deficiency is implicated in many of the motor symptoms associated with PD. Dopamine also plays a critical role within the reward pathway, where it is released in anticipation of pleasure (or accomplishment, which would be considered a pleasurable outcome).

Dr. Robert Sapolsky is a professor of biology, neurology and neurological sciences at Stanford University, and author of one of the most intriguing books that I have read in recent years, “Behave: The Biology of Humans at Our Best and Worst”. While he is not necessarily an expert on Parkinson’s specifically, he is an expert on the brain overall, and he has led fascinating research  into the role of dopamine in the reward pathway.

Should we be surprised that people in the placebo group see some improvement in PD symptoms, because they have more dopamine flowing within their brain?

Should we be surprised that the more excitement and anticipation associated with a trial, the greater the placebo response?

The fact that Laurie’s intranasal glutathione trial had such an amazing placebo response makes perfect sense.

There is no one in the Parkinson’s community that inspires more personal hope than Laurie Mischley. It’s been a week since I returned from my PD Summer School experience, but my mind is still buzzing with thoughts and ideas of things to try that were planted in my head.

Were you overwhelmed and excited about future possibilities after the last visit to your neurologist? I wasn’t.

Laurie believes that a 50% slowdown in the rate of progression is possible with dietary and lifestyle modifications. She further hypothesizes that for some, improvement is possible, and that progression can be halted. And then, she has enough suggestions and ideas up her sleeves, that she can run a PD Summer School program with 5-1/2 days of material focused on these possibilities. Am I overwhelmed and excited about future possibilities after this experience, you betcha!

Undoubtedly, some of the suggestions may be just placebos. But even if they are, one of her studies has already proven that a placebo can produce clinically significant results.

Can multiple placebos deliver even better results, or do you need to be all-in on one placebo? We do not yet know the best practices to deliver maximum efficacy from placebo therapy. But, we can see from this particular study that there’s something special about the way Laurie Mischley inspires people.

Earlier this year, I put together a presentation outlining my placebo theories, providing more detail on many of the thoughts above. You don’t need to be part of a clinical trial to experience the placebo effect, you just need hope, motivation, a positive attitude and the initiative/drive to create your own.